From vision to reality – the life of a set

Sometimes the design and building of a stage set is easy and sometimes hard.

Sometimes you have no clear idea what the Director wants to achieve.

This is the story of how we put together Veronica’s Room at the Carver theatre at the beginning of this year.

Sometimes the design and building of a stage set is easy and sometimes hard.

Sometimes you have no clear idea what the Director wants to achieve.

This is the story of how we put together Veronica’s Room at the Carver theatre at the beginning of this year.

I leave the reader to decide if it was easy or hard – what I will say it was happy and great fun for all concerned.

Let me set the background to this set build. We had just completed the annual pantomime. The majority of people involved in set building were also heavily involved in the pantomime – which was in its own way one of the most demanding we had done for a while.

In other words, the stage team were k***k*red. So, we had a week off before starting the next play – well nearly a week as you will see.

We were to work with Sebastian Lassandro a new Director to the Carver. We didn’t not know what to expect.
None of the stage team given the design of the set much thought due to working flat out for 10 weeks on the panto. Seb had also been tied up on other projects so had been unable to meet with us. The production committee (bless their little hearts) assured us it was a simple box set.

We had just under six weeks from the end of the panto to the opening of the show, in practice that meant five weeks to the first dress rehearsal.

I managed a phone call with Seb on the Sunday – he said he had some ideas and would try to put together a sketch of what he wanted. This sounded promising – the concept of a sketch – however un lifelike – is a rarity in amateur theatre.

The week off became a couple of evenings because we still had to clear a few things from the panto and Seb found a date he was free to meet with us. A likable fellow he showed us his sketch, answered questions, listened to our ideas and said “great, I leave it all to you”. Little were we to know that circumstances would dictate that we didn’t meet again for more than three weeks. 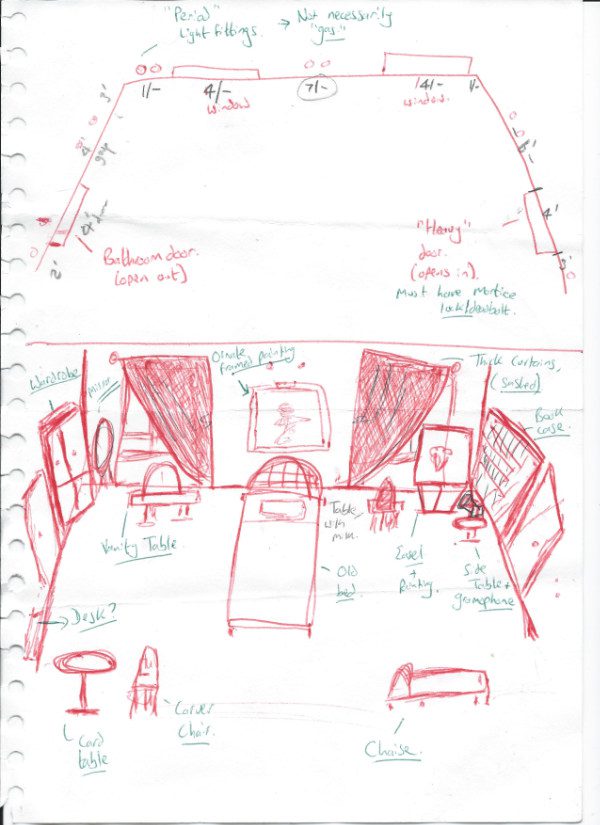 The concept was an American well to do upper middle class house built around the turn of the century in the 1900’s. The action took place in a ladies bedroom decorated mid 1930’s.

Our inspiration was the old black and white movies of houses with grand hallways, sweeping staircases leading to a first floor open hall with large doors to the main bedrooms.

As you will see from the sketch we had to compress things into our not very wide stage. We needed very small furniture to create the space he was after for acting.

Allowing for sight lines and to ensure that the entire audience could see everything we brought the back in and made it slightly narrower than the front.

The first challenge was the windows and curtains. We needed height and grandeur, we also needed to see the bars at the appropriate time. So, no easy windows for us. No just upturn a door flat and make a window – the heights and widths would be wrong. Instead we put up some flats and the team built the frames and panelled with plywood as they went. Four feet wide and six foot high with full pelmets.

A wardrobe was needed with clothes on show and drawers to hold undies. This would take up room on stage – so it became built in and eventually, when we saw the actors in action, the drawers were abandoned, and we used shelves instead.

The bed had to be built to physically fit in the room, be in period and be sturdy as people were dumped on it.

Three doors in total – bathroom, wardrobe and the main door. The main door became a work of art. It was key to so much of the action. It had to be impressive to suggest the grandeur of the house, so we made it very wide and very high. We made it so big it weighed about 200 pounds and took two men to lift. It needed a lock that the audience could see and hear.

The two doors had to be strong – if you saw the play you know why – two actresses gave them a lot of hammer each performance. The frames had to be strong because they got slammed and pulled quite hard and we didn’t want any Cross Roads Motel wobbly walls.

A bookcase with a shelf for ornaments that must not fall off when doors were slammed.

Full length curtains, over nine feet long and swaged. Material was sourced and our curtain team worked wonders to make them in record time.

Lights that went on and off at different times were relatively simple, it just took a bit of thought on the wiring and how we managed the lighting board.

The technical rehearsal on the Sunday before went like clockwork. The tech team and director met in the morning we sorted the details of the lights and sound in about three hours. The cast arrived on time at 1 o’clock, we walked through the changes a few times. A few minor adjustments and a cup of coffee.

Then we ran the show from start to finish as an extra dress rehearsal. The cast went home at 5:30 in the afternoon – probably a first for our group. Four hours later the tech team left having made the necessary adjustments.

The build was tight in terms of time. It took longer than we hoped, and many people put in lots of hours. The stage floor was only painted the night before the show opened.

Below is the finished set – do you think we realised Seb’s dream?

Epilogue – so that the Scouts could use the stage for their Gang Show, the whole set came down in just three hours on the Saturday evening after the final performance.

All that work gone in no time – but more than 1,200 people saw it during its brief but honourable life.